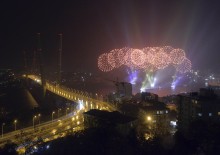 Several years of preparation and creation of infrastructure, months of discussing the agenda, a week of the summit and many million fireworks. All this is about the summit of Asian-Pacific Economic Cooperation ( APEC) on Russky Island ( Vladivostok) in 2012.

The Russian scope made itself felt everywhere: on the arrival at the new airport of Vladivostok, in the course of the trip across the new bridges up to the island, during the walk among the newly painted buildings of the Far Eastern Federal University, and, undoubtedly, at state receptions. But first of all, the Russian chairmanship set a high level at the agenda. The definition “forum” itself implies that it is limited by discussions and plan considerations, however the Russian summit surprised many experts by its effectiveness. It gave the leaders of the countries of the Asia-Pacific Region ( APR), whose share of the world’s GDP is 54%, the possibility to “synchronize the clocks” and discuss together with business representatives the situation in the world economy, which is threatened with the second wave of the crisis.

Russia was in the chair for the first time and at once under the complicated motto: “Integration – for the purposes of development, innovations – in the interests of prosperity”. These words conceal the wish not only to fit into APR economy, but also to attract investments. This is why experts divided over the question – what is more in the APEC-2012, image or investment?

Transport and logistics developments, food security, trade liberalization and regional economic integration, cooperation in the innovation sphere were announced as priorities. At a glance agenda items are not clear enough and they are not combined with each other, but Vladivostok forum showed how everything is interrelated and in what way it is possible to benefit for all the countries of the region with the right approach to the matter.

One of the main ideas which Russia promoted was the necessity to use the country’s transport means more efficiently, namely the Trans Siberian and Baikal-Amur Railways and the Northern Sea Route. The geographic location of the Russian Federation gives it a possibility to become a peculiar bridge between Europe and APR countries, but at present cargo carriers more often use traditional routes via the Strait of Malacca and the Suez Canal.

According to estimates of some experts, each per cent of trade between Europe and Asia via the Russian territory will bring into economy about $1bn. Realization of such projects will make possible to attract investments into Russian regions and direct them for further development of transport infrastructure that in its turn will provide a lot of job vacancies.

It is beneficial not only for Russia. Partners got interested into such ideas as the “Trans Siberian Railway within 7 Days” and its joining with the Trans Korean Railway. The Northern Sea Route which enables to reduce the terms of cargo delivery between South-East Asia and Western Europe also looks attractive. “The use of Trans Siberian and Baikal-Amur Railways will reduce costs and terms of goods delivery 1,5-2-3 times less,” said Russian President Vladimir Putin at the meeting of the leaders of the APEC countries.

At the same time, specialists are certain that it is necessary to improve customs procedures by considerable increase of speed for each imported freight container to turn the Trans Siberian Railway and the Northern Sea Route into busy Asia-Europe transit ways. One of the measures offered is introduction of Radio Frequency Identification which will enable to direct customs services entirely on electronic circulation of documents.

Development of transport-logistic centers is directly connected with provision of global food security. Nowadays in the world there are about 925m underfed, two thirds of which – about 580m people – live in the Asia-Pacific Region. According to estimates of Food and Agriculture Organization, by 2050 the population of our planet will grow to 9bn people, and demand for food products will increase by 70-100% in comparison with the present level (including the demand for crops from 2,1bn to 3bn tons). At the same time, agriculture growth rate will slow down.

“Russia contributes and will make a considerable contribution to stable delivery of food products on markets of the APR,” assured the Russian President. – “At present our export potential is from 15m to 20m tons of crops. In according with experts’ estimations, by 2020 our country will produce 120-150m tons annually, and this will increase its export opportunities to 30-35 and even 40m tons.” If other crop exporters do the same, the problem of food shortage will be solved.

The introduction of the crop terminal in the Far East (“Vnesheconombank and “Summa” group came to the agreement to build it) with transfer volume to 10m tons of crops a year will considerably contribute to the expansion of Russian exports to the Asia-Pacific Region. At present there is no terminal like this in the region.

Still Russia will not restrict itself by food export only; it is interested in incentives of mutual investments into agriculture and realization of agrarian projects on advanced technologies foundations. Here the matter concerns cooperation in the field of protection and rational usage of biological resources of the Pacific Ocean.

The first-rate achievement of the summit were the obligations of the participants to abstain (up to 2015) from the growth of protective import duties and harmonization of the list of 54 ecological goods for which import duties are supposed to decrease to 5% within three years (now they come to 25-30%). First of all, it concerns power equipment and “green” power engineering components (wind generators, water and air dirt sensors, etc.) In perspective the list of ecological goods may be broadened.

For the last 10 years such activities were held by the WTO, but the results have not been achieved yet. “We have managed to do this within the last months, and strictly speaking, the work to make this list logically completed and finally agreed was being held in the course of our meetings,” underlined Vladimir Putin.

In the view of most summit participants, to overcome negative trends in the world economy it is necessary to follow fundamental principles of market openness and freedom of trade. “The main task is to mutually counteract protectionism, in all its variants both conventional and new ones,” said the President of the Russian Federation. The same attitude is supported by the USA; this was confirmed by Secretary of State Hillary Clinton, “substituting” President Barak Obama. Among the Latin American countries, which are members of the APR, Mexico backs up the leading countries.

“The aims of the summit have been fully fulfilled,” Vladimir Putin made a conclusion concerning the Russian chairmanship. Russia sought “to show those points of application which result into strengthening the leading role of APEC economies in the global world, shaping additional factors of stable growth”. The Russian President specified that it became possible not only to keep succession in the APEC activities, but to shape new horizons and what is more important to give a positive signal to business circles.

Russia will be also able to promote the ideas declared within the bounds of other world structures. Next year Russia is to chair Group 20 picking up the baton from Mexico, in 2014 it will preside in Group of Eight, (G8) and BRICS. International forums present the unique opportunity for Russian businessmen to put on the world agenda vital issues the decision of which will enable to intensify competitiveness of Russian business.

The summit became not only the place to discuss and solve important international problems, but also a peculiar presentation of the Russian Far East. “There are several ways of stimulating production on this territory. For example, exemption for projects which start from point zero, so called “greenfield”, said Vladimir Putin at the press conference devoted to APEC summit results.

However the framed infrastructure for the Primorye Territory may be called the main outcomes of the summit. Thus, a new airport terminal has been opened in Vladivostok, roads have been renewed and bridges built, and the Far Eastern Federal University campus will work on Russki Island. Six research centers have been created on the new territory; they will work at the most perspective scientific trends: the study of the World Ocean resources, transport logistics, energy, biomedicine.

The American investor who founded together with George Soros hedge-fund Quantum, Jim Rodgers thinks that the concept of the Far Eastern Federal University is remarkable. “When Yale University was set up, nobody knew what it would lead to. Three hundred years later it was found out that they had established quite a good institution,” he said.

The Russian authorities valued the chairmanship of Russia within 15bn rubles. All the rest of it (600bn rubles) was spent on the region requirements: gasification, transport infrastructure, building of university campuses where guests lived.

Thus, the Primorye Territory got an appreciable impetus for further development which is to have an effect on economic growth of the region within next years and even decades. The Russian chairmanship in APEC both strengthened the role of the country in the Asia-Pacific Region and acknowledged its readiness to turn economy to the East. Large-scale APEC summit in Vladivostok showed preparedness and aiming of the Russian authorities to develop relationship with APEC countries in every possible way.

There are hopes that Russia will have enough wisdom and strength not only to face West and East alternatively balancing on differences in their approaches but to conduct good-neighborly, fair and distinct policy resulting into all-round benefit. At the same time Russia possesses everything to become a leading partner for many countries of the Asia-Pacific Region, especially taking into account the fact that clearly expressed goals are often much more important than papers signed and declarations announced in southeastern countries.