Russia will help Syria in case of attack: Putin 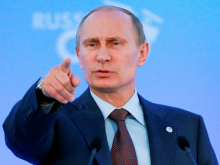 St. Petersburg, Russia (SEP/06/2013) - the President of Russia, Vladímir Putin, said today that his country will help Syria in the event of a foreign military attack.

"Are we going to help Syria? Yes, Putin said in response to a question about what will do Moscow in case of foreign military intervention in Syria, in the final of the G-20 Summit in St. Petersburg press conference.

Putin added: "we are already helping. We supply weapons and cooperate in the economic field."

"I hope that more cooperation will be in the humanitarian field included the aid supplies to the civilian population which is in a very difficult situation," he said.

He also stated that the plans of the United States of launching a limited "attack " on Syria only have been backed by five countries of the G-20.

Putin listed France, Canada, Turkey, Saudi Arabia and the United Kingdom, although he stressed that the Parliament of this last country "according to the will of the people" expressed their rejection of military action against the Arab country.

Meanwhile, said that those who "were categorically against (of the war) are: Russia, China, India, Indonesia (...), Argentina, Brazil, South Africa and Italy".

"The Chancellor (Angela Merkel) of Germany also acts with great caution. Germany has no intention of participating in any military action," - he said.

Putin stressed that even in countries that support military action against Damascus public opinion is overwhelmingly against these plans.

He also noted that the Pope Francisco has also expressed his opposition to Western military intervention in the Arab country.

"I remind that the use of force against a sovereign State is possible only in the case of self defense and Syria, as it is known, does not attack USA." "And, secondly, if there is a decision of the Security Council of the United Nations", said.

He added that "as one of the participants in our discussion said yesterday, those who act otherwise put themselves outside the law".

"I don't want to even think about which other country can be victim of external aggression," he responded to the question about which would be the next on the list of potential targets of a Western military intervention.

Putin warned that a possible military action against Syria would extremely complicate the solution of the nuclear issue on the Korean peninsula.

"Under these conditions, try to convince the North Koreans give up their nuclear program. Come on, guys, give up your  weapons! ", said.