The Ministry of Foreign Affairs of the Russian Federation: Broadening partnership with Latin America 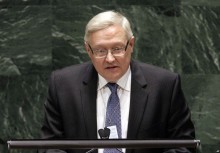 He has been in the MFA system since 1982, working in various diplomatic positions in the Central Office and abroad. From 1995 to 1999, he was Head of the OSCE European Cooperation Department, and then worked at the Russian Embassy in the United States for 6 years. In 2005, he headed the European Cooperation Department Ministry of the RF MFA. Since August 2008, he has been Deputy Minister of Foreign Affairs of the Russian Federation holding the rank of Ambassador Extraordinary and Plenipotentiary awarded the Order of Honor and Order of Friendship.

Development of Russia's relations with the countries of Latin America and the Caribbean is one of the important directions of the Russian foreign policy. Over the last decade, Latin American countries have matured in economic and political terms, and have become the new center of the multi-polar world. Moscow is interested in expanding comprehensive ties with Latin American countries and building a mutually beneficial partnership with them. Let us see what ways, methods, and approaches can be applied to this process.

No doubt, Latin America is increasingly becoming an independent and a major center of influence on global processes. It is a fait accompli. And we should start from the fact that the role and importance of Latin America as a whole and the individual countries of the region in particular are tend to increase with the course of time.

Thus, Brazil has become the de facto fifth economy in the world. It is one of the top four candidates for the membership as a permanent member of the UN Security Council, and one of our trusted partners in BRICS. Along with Argentina and Mexico, Brazil is part of the Group of Twenty. Representatives of Brazil head the Food and Agriculture Organization of the United Nations (FAO) and the World Trade Organization. Mexico, Peru, and Chile are active members of APEC. Mexico and Chile are full members of the Organization for Economic Cooperation and Development.

An important aspect of the political consolidation of the region is the sustainable and successful pursuit of Latin America to complete – through political initiatives, if not experimentally - the challenging task of positioning in the international arena and fixation of these particular approaches to international affairs. Latin American countries (and this is no exaggeration) say in the same political voice, if not in unison, on many issues, and this is typical of almost all countries in the region, regardless of the political color of individual governments or their foreign policy priorities.

Such solidarity is a significant factor in international affairs, and one should not underestimate it, as is evidences by the categorical rejection of the economic and financial blockade of Cuba by the United States. Versatility, primacy of international law, strengthening of the United Nations, and recognition of the central role of the United Nations – these are the factors that are objectively working for convergence of approaches of Russia and the countries of the Latin American region in terms of ​​both security and international affairs in general.

The prime factor in this trend was the formation of the Community of Latin American and Caribbean States (CELAC) and organization of all the 33 countries in the region without United States and Canada. Following a meeting of the Minister of Foreign Affairs of the Russian Federation and the extended CELAC trinity (Cuba, Chile, Costa Rica, and Haiti), they have set the task of establishing a visa-free regime with the Community. According to Sergey Lavrov, he hopes that it "will be implemented in the nearest future." We believe that this issue has long been fully mature to be resolved. Especially as the states’ mutual interest and eagerness to cooperate is really significant and calls for a consolidated institutional support.

Moscow is successfully cooperating with partners in Latin America and the Caribbean in the mainstream of Russian foreign policy priorities, including initiatives to enforce measures of transparency and confidence-building in outer space, international information security, improvement of the system of treaty bodies on human rights.

One of the important tasks of the joint efforts with Latin American partners is to prevent an arms race in outer space and further militarization of outer space. This was confirmed at the Brazilian-Russian Summit in Moscow.

It is important that a number of Latin American countries jointly support the Russian projects and Resolution of the UN General Assembly against the glorification of Nazism.

We have managed to overcome the ideological blindness of former times. To Russia, Latin America today is an important independent developing and promising area of foreign policy. And there is an important advantage: our relationship is not overloaded with historical conflicts, disputes, or any phobias.

Almost every Latin American government is our natural ally in promoting the principles of multilateralism and the rule of law in international affairs. Relations with five countries of the region - Brazil, Venezuela, Argentina, Cuba, and Ecuador - are about to reach the level of strategic partnership.

Latin American countries are also increasingly interested in Russia. For example, a new Embassy of El Salvador in Moscow has been established. By the end of the year, Honduras diplomatic mission is going to open its doors as well.

The political dialogue is also developing actively and steadily. A series of recent events includes meetings of the Russian Presidents with the leaders of Brazil, Peru, and Chile at the summits of the Group of Twenty, APEC, and other international forums. As always, the agenda of the RF MFA with Latin American colleagues is ambitious.

The economic potential of Latin America has strengthened significantly over the past few years. The total GDP of the region is about 3.15 trillion U.S. dollars, that is 2.5 times higher than that of the Association of Southeast Asian Nations (ASEAN). The foreign trade volume is 1 trillion U.S. dollars. The share of industrial products and other products with a high processing degree in exports is about two-thirds.

Even in this turbulent period for the global economy, Latin America has proven that it is able to effectively cope with the global economic turmoil and generally keep the course that combines the high topic of economic growth with the solution of social problems. According to experts, in 2013 the Latin American growth is going to be about 4 percent, coming second only to China and India, and is characterized by stability. That is why the region is promising for many partners in terms of trade and investment cooperation.

Russia needs a new vision to keep pace with other states expanding their presence in the Latin American region, and do its part. There are significant reserves and great resources in the economic sphere. We cannot be satisfied with the level and pace of trade, economic, and investment cooperation yet.

Of course, there are achievements, including from the point of expansion of Russian exports to several countries in Latin America, but these results are not sufficient. In 2012, the total turnover reduced by a billion U.S. dollars from 17.2 billion in 2011 to 16.2.

Probably, this is due to the impact of the global economic slowdown, but this is a minor figure against what was achieved by the Latin American countries with other partners. We need new forms and direct contacts between businesses. We have examples of such work, we have the initial experience of the relevant state support to state guarantees and export credit, and we have what to use as a reference standard.

Over the recent years, the region has been entered by a number of large Russian companies: INTER RAO UES and KAMAZ that is not only delivering vehicles to Venezuela, Colombia, and Cuba, but also assembling them at several Venezuelan enterprises. These also include United Aircraft Corporation, which has a sustained order to supply aircrafts to Mexico. Russian Helicopters has send a first batch of helicopters to Brazil in 2012.

For some Russian products, such as fertilizers, Latin America is the basic region. More than 75 percent of domestic exports go to its countries. Today, Latin American partners are ready to accept supplies of Russian energy equipment.

The main import share is primarily agricultural products, where Latin America is leading by some indicators: 97 percent of bananas go to the Russian Federation, 88 percent - soy and other beans, cattle - about 80 percent, sugar cane - 73, and cut flowers – 50 percent.

However, ties with small and medium businesses remain weak. Progress is being made, but this is very insignificant. Business mission trips are hard to organize due to geographical remoteness, and other factors, including subjective ones. Also, it is worth to strengthen inter-bank ties. There are some arrangements in this field, but they do not work.

Relations between constituent entities are very promising. Many Latin American countries have a federal form of government, so the entity-to-entity interaction can give an additional impetus to the development of economic, humanitarian, informational, and cultural ties.

Tourism and culture are the issues within reach of foreign services as well. The list of Latin American countries with which we have direct flight connection is increasing. The fact that our airlines fly to Cuba, Mexico, and Dominican Republic has increased tourist flows significantly. New air service agreements are under development.

In general, the issue of governmental support to major start-ups, projects, and initiatives are in sight and in the focus of all the agencies involved in relations with the specified region at the governmental level.

It is obvious that we should expand direct contacts of entrepreneurs and develop a form of public-private partnership and cooperation, including these with third countries, such as the interaction with the Chinese partners in construction of generating capacity in the field of hydropower industry in Ecuador.

Ties with regional agglomerative unions are also promising. In the near future, we expect to have negotiations on entering into agreement between the Customs Union, Eurasian Economic Commission, and MERCOSUR Union. This is an important contribution to the formation of a new modern system of contractual and legal relationships.

Russia and Latin America are natural partners across virtually the entire range of issues. We have an important advantage. Our relations with Latin American countries are not overloaded with historical conflicts, disputes, and other phobias. We have much more in common than meets the eye. Thus every visit and every contact makes it possible not just make a reconciliation of approaches, not only exchange out points of view, but also to find a new plane of contact, produce a matter, which is advantageous to our relations to the benefit of Russian-Latin American cooperation in general. We need to look reputable in Latin America. It is important that Russia is treated there as the center of attraction. We will strive to do so, strive to make friends and interact with all the countries in the region.