Great Pele: from toe kicks to the Best in the World award 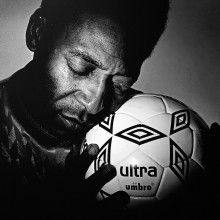 When it comes to the best footballer of 20th century Diego Maradona and Pele, the two candidates, are usually mentioned. The matter of who is better still remains unsettled, and they take niche in the footballers' temple of fame by turns. The International Olympic Committee decided to stay away from such dispute ranking Pele "Athlete of the Century".

Fans call him simply "the king of football". A difficult way lead Pele (full name - Edson Arantes do Nascimento) to this informal title. He was born in Três Corações, a small Brazilian town. His parents weren't reach, and little Edson didn't even dream of professional competitive career, football was just his favourite hobby. But he gave his best to it. At first, they didn't spend money on gears, so instead of the ball young Pele used everything he had at hand: for instance, fruit or stuffed sock. For the latter, his father often gave the rough side of tongue when at home he couldn't find another pair of socks for so long.

After a while Pele the elder, being a footballer himself, sent his son to a local team to improve his skills. One day he attended a trial to famous Santos. He was taken there on terms of monthly fee of 75 dollars. Pele remembered well his origin, so he decided to hit the ground running and demonstrated his skills: field vision, ball sense, becoming a team member at the age of 15. A year later, for the first time Pele took the field during the official match of his new club and scored a goal at once. Further on, his results improved at an exponential rate. At the age of 17 the football whizkid as the national team member went to the World Cup where he helped his team to win the World Cup and was ranked tournament best player.

It is noteworthy that in his first cap Pele played against USSR team. Then a Russian goalkeeper was Lev Yashin already called the world legend. Later on, "the king of football" and best goalkeeper of 20th century became good friends. "When I saw Yashin at the field for the first time I get stupefied... The goal was kept by a real giant, and hiding the goal only by spreading his arms was enough. The first thought I had - one could never score a goal to such goalkeeper, -  noted Pele later in his commentaries. He believes that his debut at the World Cup and first meeting with Yashin became a conditional starting point for his career: I remember this moment very well. My first world championship. Just imagine - the Last Eight and I score a decider. I was only 17 years old. And great Yashin handed me the world cup. After that I got a title of "the king of football".

Despite his rapid and giddy success Pele remained energetic, the most important ingredient rarely found in gifted people. He worked hard during training sessions and stayed after general team activities to hone tricks. That's why "the king of football" kicked goalwards and handled the ball perfect with both feet. By the way, it was initiated by Pele's father, when his little son kicked a sock instead of a ball. At first, he did it only with his right foot, and until he learnt to juggle with the left one as skilful Pele the elder didn't get out of his son.

One more phenomenal gift that was maintained and developed during training sessions is his speed. A few know that at the peak of his powers it took less than 11 seconds for Pele to cover hundred metres that is almost the same as results of professional sprinters.

He went through the mill - but star fever couldn't catch the Brazilian. Although there is an entire chronicle of his merits and achievements from his early age on up to twilight of his football career. Any footballer dreams to win the world Cup. Pele as a player did it thrice! And it's still the record. For those who prefer statistics: Pele scored 1281 officially registered goals in 1363 matches played for Santos, Cosmos and Brazilian national team. By the way, despite his popularity, in his career he was capped only for two clubs. Hat trick is a criterion of skill level for modern footballers. In his personal history Pele scored 92(!) hat tricks. Besides, in 30 matches the Brazilian kicked 4 goals for one game, and in Santos against Botafogo de Ribeirão Preto match "the king of football" kicked even eight goals (game final result was 11:0 for Santos)

By the way, why Pele? In what way did Edson Arantes do Nascimento changed into this short four-letter nickname? Funny, but "the king of football" himself can't answer this question exactly. He only remembers it to begin at school in São Paulo, and here is one of the popular versions: the world "pele" came from the name of Brazilian street football "pelada". And because the future cult hero adored playing it he was fastened this nickname very quickly.

Pele may have been just one from the list of great footballers, but he managed to become not only the athletic legend, but real top-ranker. Even military conflicts in Zaire and Nigeria were suspended for games where he played. Internet stories and tales tell about an event when a fan crossed Africa to see a game where Pele played. In 1995, another African illegally arrived to Brazil in the hold of  dry-cargo carrier in order to ask Pele to assist in making peace between tutsi and hutu tribes in Rwanda.

One more stunning example: thousands of illiterate Brazilians learnt reading only in order to read his autobiographic book "I am Pele!" For this Brazilian Ministry of Education awarded "the king of football" with a gold medal. However, nowadays in spite of persistent fame worldwide Pele is subject to obstruction at home. The reason is his propagation of holding the World Cup in the territory of Brazil when the country suffered some social and economic problems. "Visit hospitals, go by bus unsecured, and we'll see what you'll say" - such notes appeared in Brazilian social networks when Pele featured in several videos appealing the population to stop rallies and focus on football. Probably, it was rhe first time when the cult hero's opinion wasn't considered, but criticized instead. Well, none of cult heroes can't be perceived identically.

Let's finish our historical reference with what was in the beginning - The International Olympic Committee elected Pele the best athlete of the 20th century. But what is interesting is that he haven't only been the Olympic champion, but even haven't participated in the Games, taking into account all his achievements and regalia.